The Australian Shepherd are an intelligent, medium-sized dog of strong herding and guardian instincts. They are also delightful and loyal companions and great family dogs. They love to be part of the daily hustle and bustle, and enjoy riding in the vehicle just to be with their beloved master. As farm dogs, they diligently carry out their responsibilities, be it bringing in the stock or finding the stray one that got tangled in the brush. They are easily trained, easily housebroken, because they are intelligent and eager to please. Aussies have been used as seeing-eye dogs, as utility dogs to the physically handicapped, hearing aid dogs, police and narcotics dogs, and search and rescue dogs. In the northern areas they have also been used as sled dogs. Many go with their masters as volunteers to children’s homes and nursing homes to do therapy work. Truly, the Australian Shepherd is a highly versatile dog. “Aussies” (as they are lovingly nicknamed) are very active dogs that need a great deal of exercise on a daily basis to prevent them from becoming bored or frustrated and consequently developing destructive habits. Because of their high energy level, combined with high intelligence, Aussies need to be given a “job” to perform, be it shepherding the children, protecting the house, herding livestock or competing in dog events. One of the most frequent reasons Aussies get turned over to rescue groups is that their owners didn’t anticipate how energetic these dogs are and weren’t willing or able to constructively channel that energy through training. Aussies want to be with their owners all the time, which is why they insist on following their owners from room to room in the house, and love nothing better than going along in the car or truck on errands. They can be highly territorial and protective of their masters’ possessions, potentially causing serious difficulties unless this behavior is controlled with proper training. 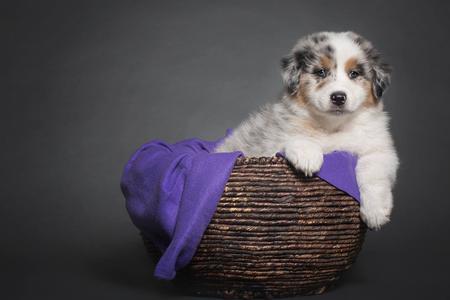 In Conformation, each dog is judged against a written Breed Standard. The Breed Standard outlines the general appearance, temperament, structure, and movement that a dog of that breed should exhibit. Here is a link to the AKC Australian Shepherd Breed Standard. 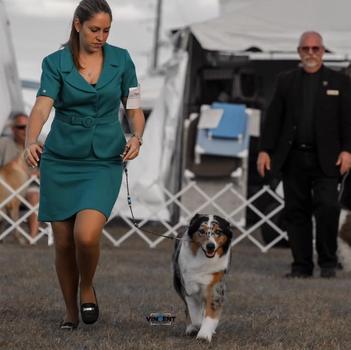 While there are many theories as to the origin of the Australian Shepherd, the breed as we know it today developed exclusively in the United States. The Australian Shepherd was given its name because of their association with the Basque sheepherders who came to the United States from Australia in the 1800’s. The Aussie rose rapidly in popularity with the boom of western riding after World War II, becoming known to the general public via rodeos, horse shows, movies and television. Their inherent versatility and trainability made them useful on American farms and ranches. The American stockmen continued the development of the breed, maintaining the versatility, keen intelligence, strong herding instinct and eye-catching appearance.

The Schedule for the majority of US AKC Conformation shows can be found on infodog.com. In addition to the Show Schedule, you can also find a Judges Directory, Show Results, and Online Entry System.

Aussies have four main recognizable colors which are Blue Merle, Black Tri, Red Merle, and Red Tri. There are many other variations of color that may or may not be recognized in the conformation ring. For more information about the color variations, click the link to the right!